The Core Campus Project is an ambitious and transforming construction project which will create a vibrant, globally connected hub for intellectual exploration in the center of George Mason University’s Fairfax Campus.

At the Core of it All

The showcase will be a state-of-the-art, six-story, 218,000-square-foot building with classrooms, workplaces, meeting rooms, community space and the Mason Innovation Exchange. It also will be the central academic center for the College of Humanities and Social Sciences.

The building, which will be erected on the site of the existing Robinson Hall, will serve as the defining center of academic life, both esthetically and practically, and offer maximum teaching and learning flexibility. Classrooms will accommodate 27-120 students and have video capabilities to enhance teaching creativity. Glass-enclosed classrooms will allow students, faculty and staff to be connected visually, putting learning on display. Large windows will bring in natural light.

Why are we doing this?

Because Robinson Hall, one of the oldest buildings on campus, is reaching the end of its useful life, as is much of the campus’s underground heating and cooling infrastructure.

Mason, Virginia’s largest public research university, also continues to grow and is committed to providing the kind of space and atmosphere students, faculty and staff are demanding, one where all can explore the power of ideas and better understand the world in which we live–a national example of a healthy and thriving educational community. 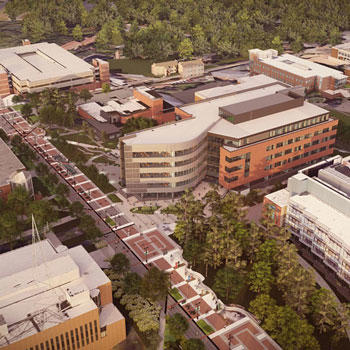 The construction of the new academic building and the improvement and expansion of Wilkins Plaza will change the Fairfax campus in remarkable ways.

Improvements to Mason’s utility infrastructure might not get as much attention as a fancy new building, but they are just as vital. Here’s a quick primer:

Roger Wilkins Plaza replacement and expansion: The length of the plaza will be extended from Robinson Hall east to Southside Dining. It will provide event space, informal seating areas with wi-fi coverage and power hookups, areas where student organizations can provide information about campus happenings, and a new water feature to honor Roger Wilkins’s important influence on Mason. The extension will require raising the existing high temperature hot water tunnel walls to bring surface walkway slopes into compliance with ADA guidelines.

Underground utility replacement and expansion: These improvements include replacing and/or installing 16,255 linear feet of chilled water piping within the campus thermal infrastructure loop system to provide improved reliability and flow. The project also builds 100 linear feet of new tunnel with 200 linear feet of high-temperature hot water piping to enable increased redundancy in the system in the northeast sector of campus.